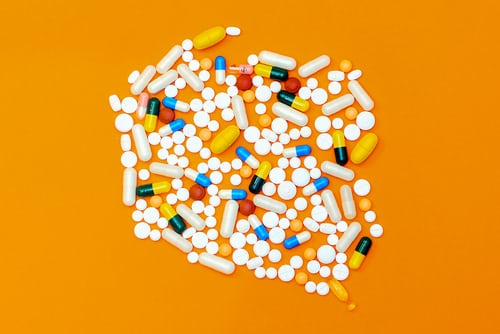 Hypothyroidism, when the thyroid is unable to produce adequate thyroid hormones (T4 and T3), is common, affecting about 0.5-1.0% of the population.  It affects about 5 times more women than men.  Hypothyroidism can be difficult to diagnose from a history of symptoms and physical exam because the symptoms (fatigue, mild weight gain, cold intolerance, constipation, dry skin, menstrual irregularities) can be caused by many other illnesses, and even be common in healthy people.  Hypothyroidism must be diagnosed using laboratory testing.  The thyroid stimulating hormone, made by the pituitary and controlling thyroid function, is the most sensitive test for detecting thyroid dysfunction.  When the TSH goes up it indicates that the thyroid is having difficulty making enough thyroid hormones.  When the thyroid hormones become abnormally low, despite an increased TSH, hypothyroidism is diagnosed.  The treatment is replacing the thyroid hormone by taking T4, T3 or a combination of the two in the form of pills.  Prior to the availability of synthetic human T4 (levothyroxine), about 50 years ago, hypothyroidism was treated with desiccated animal thyroid (usually from pigs).  TSH tests have also become much more sensitive and accurate in recent decades, which has greatly improved the accuracy of dosing thyroid hormone.  The standard of care is to use T4 (levothyroxine) as the sole thyroid hormone for replacement.  The reasons for this are that it has a long half life, meaning that the levels of T4 stay stable in the body with once daily dosing.  Also, the human thyroid makes about 15 times more T4 than T3, and almost all of the T3 in the body of someone with normal thyroid function comes from conversion of T4 to T3 outside of the thyroid.  In a person with hypothyroidism the body is still able to convert the T4 (levothyroxine) taken in pill form to T3.  Most people with hypothyroidism respond very well to this treatment, but approximately 10-15% of people treated appropriately for hypothyroidism with levothyroxine (T4) alone, continue to have worse symptoms that are associated with hypothyroidism than similar people that do not have hypothyroidism.  Unfortunately, the symptoms of hypothyroidism can be caused by many other illnesses, and even occur in healthy people, so it is very difficult to know how much hypothyroidism and/or its treatment are responsible as the cause.

It is controversial whether using combination therapy with T4 and T3 together may be helpful for some patients with ongoing symptoms that could be related to hypothyroidism.  Some studies have suggested some improvement in symptoms in a subset of patients with hypothyroidism when treated with combination T4+T3 therapy, others have not.  Unfortunately, the studies have generally been small, have used different dosing combinations of T4+T3, have not necessarily treated both groups to an equivalent TSH, and have had design issues that make them susceptible to bias.  This leaves us in the position where there is no convincing evidence to suggest that combination therapy will help some patients with hypothyroidism who continue to feel unwell despite appropriate levothyroxine treatment.  Also, there is no definite proof that combination treatment will not help some patients.  Therefore, a trial of combination T4+T3 could be reasonable in some patients, but not all will benefit.

The treatment options for combination therapy are desiccated (animal) thyroid hormone and synthetic human T3 (liothyrodine, brand name Cytomel).  Taking T3 in pill form presents challenges because of a much shorter half life such that T3 levels in the body will go up significantly a few hours after taking T3 and then go down again a few hours after that.  To keep a relatively steady level of T3 the daily dose needs to be divided into 2-3 smaller doses taken every 8-12 hours.  Pig thyroid hormone production differs from humans in that the ratio of T4:T3 made by pig thyroid is around 4-5:1, as opposed to about 15:1 in humans.  So, if a person takes desiccated thyroid hormone, they would be taking relatively a much higher amount of T3 relative to T4 compared to what a healthy human thyroid would produce.

In order to more closely mimic normal human thyroid function a combination of levothyroxine (T4) and liothyronine (T3) can be used in doses selected to come close to the human ratio of T4:T3 production of about 15:1.  Still the daily T3 dose of the treatment should be divided into 2-3 doses evenly spaced doses.

Before considering a trial of combination therapy it is important to ensure that the dose of levothyroxine has been optimal for at least 2-3 months, and that despite that, symptoms persist.  Other possible physical and mental illness must be considered, investigated and treated appropriately to ensure they were not the cause of the symptoms.  If a trial of combination treatment is planned most experts (including the American and European Thyroid Associations) would suggest using combination levothyroxine and liothyronine in a ration or about 15:1 and dividing the dose of liothyronine as mentioned above, in order to mimic human thyroid hormone production as much as possible.  Repeat TSH should be checked in about six weeks and the dose adjusted as necessary to achieve normal thyroid function tests.  After about 2-3 months of stable normal TSH if the combination therapy has not helped it would be recommended to go back to the standard of care, which is levothyroxine alone.

People trying combination therapy should be aware that it is not the standard of care, that the potential risks and benefits are not well defined.  Whatever method of thyroid hormone replacement is used the TSH should be maintained in the normal range, and if so that should indicate that the thyroid hormone treatment is safe.  Extra caution should be taken in certain situations where there is even less evidence, for example it is recommended that pregnant people should generally use levothyroxine alone to maintain pregnancy appropriate TSH levels.

Help us to Help Others